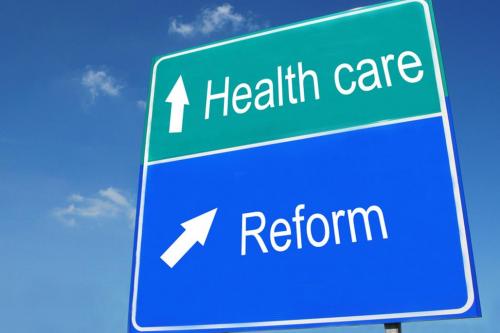 Trump Getting Involved In New Push To Pass Healthcare Reform

Trump, after facing some criticism for not having a clear legislative win in his first 100 days as President, is determined to see his campaign promise to repeal Obamacare seen as a success.

After this year's early debacle in their effort to repeal and replace Obamacare, GOP lawmakers are reigniting their push to pass their own healthcare reform. Trump, after facing some criticism for not having a clear legislative win in his first 100 days as President, is determined to see his campaign promise to repeal Obamacare seen as a success. The proposed bill has been changed numerous times as Republican leaders in congress attempt to scale back the government's role in healthcare, without leaving millions of people uninsured.

Never one to sit on the sidelines during a negotiation, President Trump is taking an active role once again in trying to get the necessary votes to push a vote though congress. Aides say Trump has been making calls to GOP lawmakers in a clear attempt to consolidate support for a potential bill. Trump faces pressures from far-right conservatives whose main priorities are ending the federal government's involvement in healthcare. In contrast, Trump also faces scrutiny from voters who do not want the pre-existing conditions mandate removed from the U.S. healthcare system.

It remains to be seen what direction the final version of the proposed health reform bill will look like, in part because of President Trump's seeming openness to making many changes. It is unclear whether Trump would be open to passing a bill that does not protect people with pre-existing conditions, which as a major point of debate in Washington.

In March, Trump made his first push to pass a new healthcare bill, which ultimately fell apart largely because a very conservative segment of congress called the Freedom Caucus would not support the bill.

On May 3rd, Mark Meadows, who heads the Freedom Caucus, stated the votes are still not there for passing a reform bill. With President Trump back involved, maybe the second time around will prove to be more successful. More updates to come.