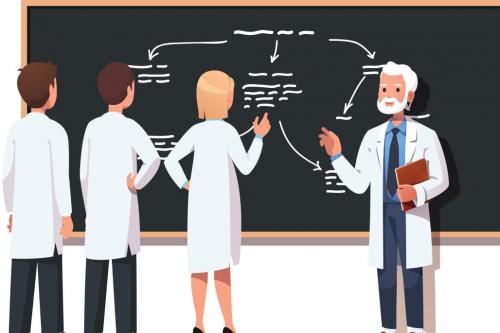 The US healthcare system can be explained as a combination of private and public coverage options. Understanding the structure of coverage is where things get complicated.

Unlike many other countries in the world, there is no universal healthcare system in the US. Healthcare is largely provided by the private sector, and financed by a system of private insurance, and federal and state government programs.

How the American Healthcare System Works

The US healthcare system is comprised of individual medical providers, including primary care and specialist doctors, non-profit, for-profit and government hospitals, clinics and urgent care centers, and individual support entities, such as medical laboratories and imaging centers.

How Much Americans End Up Paying

In 2014, individual healthcare costs averaged over $9,000 per person. This figure is a total cost from the system and consists of individual payments in the form of copayments and deductibles.

If you are faced with extremely high medical costs for severe or prolonged illnesses, medical costs can be deducted from your personal income tax. While users of government programs such as Medicaid pay low costs, their options for treatment are often limited.

Why Healthcare Is So Expensive

As with any for-profit system, providers will charge what the market will bear. Since almost all of the healthcare market consists of various private insurers and government programs, many individual consumers pay very little of the actual cost of their healthcare, beyond nominal required co-payments.

There is continuing pressure on the system from constantly increasing drug prices, wages for medical professionals and cost of services. Due to the litigious nature of the US legal system, malpractice insurance and settlements also contribute to healthcare costs, with payouts totaling $3 billion in 2013, plus the costs of malpractice insurance and legal fees to defend against lawsuits.

Is the System Any Good?

The US healthcare system, despite being so expensive, has been consistently less effective than the systems of other developed countries in many areas, including rates of infant mortality and years of life expectancy.

At the same time, the American system does have significantly shorter waiting times for diagnosis testing, surgeries, and disease treatment. Individual health results are shown to be dependent on your insurance coverage, ability to pay for treatment, and your geographical location (rural or urban). This is key to having the US healthcare system explained.

The Structure of Health Insurance Costs

Healthcare in the US is financed by a mix of private insurance, distinct federal government programs, such as the Veterans Affairs Health System and Medicaid, and programs funded in individual states. Private insurance is a benefit often provided by employers for their employees and their families or purchased by individuals.

Medicare is provided for qualifying US citizens and resident aliens once they reach age 65 and is partially funded by payroll taxes collected over an individual’s working years. Medicaid is provided for the poor as a last resort. Some individual states provide coverage that either supplements federal government programs or provides coverage outside of federal criteria.

Are There Public Healthcare Options?

There are currently no universal public options. Six major programs, with specific eligibility criteria, provides coverage to approximately 30% of the population, at a cost of $500 billion.

The State of California Medi-Cal program is a prime example of an individual state program, providing over $20 billion in healthcare funding to its low-income residents. Private insurance remains the driver of how the American healthcare system works.

Healthcare After the Affordable Care Act

The ACA did not fundamentally change the structure of the US healthcare system, the debate continues over the effectiveness of the Act to cut costs and increase coverage. By many measures, individual costs, mainly in the form of a significantly higher level of deductibles, increased dramatically for a significant percentage of people.

Recent Support for Medicare For All

While there does not yet seem to be a universally agreed-upon definition of such a program, all 2020 presidential candidates from the Democratic Party support some form of this concept. Polling shows wide support when general terms are used, and less support when astronomic cost figures extrapolated from the current Medicare system become part of the question.

Should the Democrats gain power in the 2020 elections, we will likely see a repeat scenario along the lines of the Affordable Care Act legislative process.

Healthy Blood Pressure Range | Where You Should Be At Your Age